Reflections on the Inaugural Cause Warrior Ride: An Interview with Darrel & Roseann Mooney 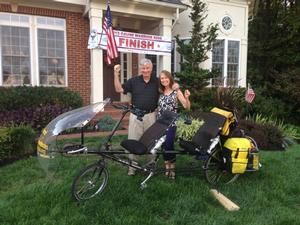 Fairfax, VA (August 6, 2014) – Last year, two veterans pedaled across the country covering nearly 4,000 miles in 80 days to raise awareness and support for wounded warriors and their families. They also raised more than $100,000 to support Cause and its programs at 12 medical treatment facilities located throughout the US and one in Germany.

Under blue sky with lots of sunshine, Darrel and Roseann Mooney departed from Ft. Lewis WA, near Seattle, on June 30 and made their way to Washington, D.C. on October 6, pedaling through many small towns and communities across the nation. As they reflect on their experiences, they recall with fondness the people they encountered and the wonderful support shown for our nation’s service members. Gratitude for military service was expressed in heartfelt gestures: a couple of dollars pulled from wallets for impromptu donations; restaurant tabs paid by anonymous patrons; local officials clearing sections of road or riding along to ensure their safety. One individual even ran after Darrel and Roseann in an effort to empty an ashtray’s worth of change into a contribution jar!

Time and time again, the generosity and kindness of everyday Americans was on display.

Roseann recalls, “The people in little places all over the USA were so phenomenal and so supportive of what we were doing—of what Cause stood for; they realized this need (to support veterans) was there, and they seemed to relate to that need. Everyone seemed to have some story, and showed enthusiasm and support for what we were doing.”

Planning for the event began long before the couple left Seattle. West Point Classmate and friend, Doug Williams, and his wife Debbie served as the virtual support team for the duration of the ride. They checked in daily with the riders, coordinated media and fundraising events across the country, and rallied the entire West Point Class of 1967 to support the Ride. Both couples worked tirelessly for months before the ride, putting finishing touches on routes, media activities, and contingency plans. There was plenty of evidence that it was a true military operation!

“For us, it was a phenomenal experience,” said Roseann. “When we initially got involved, we learned so much about Cause before we got started. The mission was just something that was near and dear to our hearts, being veterans. We were a little unsure of how we were going to promote it, but we knew we wanted to be a part of it!”

As they traveled through towns and attended events, they handed out hundreds of small business-size cards with contact information about Cause and the Warrior Ride. “Those cards really made a difference,” said Roseann. “People could go to the Cause website, learn about its programs, and even make a donation. At a minimum they helped to spread awareness of the need for veterans programs.”

Darrel noted, “Veterans from all generations appreciated what we were doing, with older vets being the most appreciative. They were pleased to see that there were organizations and programs out there that never existed before for this new generation of veterans.”

When asked about the ride and their favorite memory from the event, neither Roseann nor Darrel could point to any one, single thing that stood out. “There wasn’t just one thing or major event,” they both stated. “It was the series of little things that happened in every town, in every community, each and every day. It was the entire experience.”

Darrel and Roseann Mooney have already volunteered to help with the next Warrior Ride event. “We’d love to be involved in the planning,” said Roseann. Darrel added, “I think Doug and Debbie Williams would join us, particularly if you consider motorcycles for the next ride!”